Over the years I have worked on many different research and computing projects, all over the world. Most of my scientific work is related to the origin of life, evolution, and complex systems & emergence. Below is a brief overview of the main projects that I am currently working on. Preprints of my publications on this work are available for download (see the list of publications).

Below are a few relevant references related to the research projects described on this page.

The origin of life: A selfish act or a cooperative effort?
W. Hordijk
This View of Life, 18 September 2017

Having worked on so many projects over the years, it is impossible to list all of my collaborators. But here are a few people who have definitely had a major impact on my science & thinking.

Mike Steel: My main collaborator on autocatalytic sets. We have been working together for more than 10 years now, and it's been a great pleasure!

Stuart Kauffman: The originator of the concept of autocatalytic sets, and still an active collaborator. It's an honor to be working so closely with him.

Melanie Mitchell: One of my (former) PhD advisors in the EvCA group at SFI. A wonderful teacher and science popularizer.

Jim Crutchfield: My other (former) PhD advisor in the EvCA group at SFI. A great inspiration and example.

I believe in Spinoza's God who reveals himself in the orderly harmony of what exists, not in a God who concerns himself with the fates and actions of human beings.
--- Albert Einstein

Autocatalytic Sets and Origin of Life

Current work continues our mathematical and computational investigations, but also focuses on bringing theory and experiments closer together. An increasingly large network of collaborators is developing around the general concept of autocatalytic sets, including chemists, biologists, mathematicians, computer scientists, physicists, and even philosophers. Our hope is that, eventually, this work will provide detailed insights into the origin and early evolution of life.

My short (10min) introductory lecture on autocatalytic sets is available on YouTube.

In the Evolving Cellular Automata (EvCA) project, a genetic algorithm was used to evolve cellular automata to perform certain non-trivial computational tasks, in an effort to gain more insight into the question: "How does evolution produce sophisticated emergent computation in decentralized systems composed of simple components limited to local interactions?" A cellular automaton is a simple model of a decentralized system with only local interactions, and a genetic algorithm can be used as a simple model of an evolutionary process.

The results of the EvCA project have provided much insight into the evolution of emergent computation in cellular automata. As a graduate student I was part of this project, which was mostly based at the Santa Fe Insitute (SFI). I still regularly use this versatile modeling framework to study additional phenomena in evolution, such as how representations come about, or the notions of "complexity by subtraction" or "evolution of evolvability".

Natural systems such as the slime mold Dictyostelium discoideum and the Belousov–Zhabotinsky reaction show beautiful spiral waves in their dynamical behavior. However, these global patterns arise spontaneously from only local interaction between individual amoeba or chemicals. How does this happen?

We have developed a simulation model, implemented as a cellular automaton, to reproduce and study such spiral wave formation. These patterns appear over a range of model parameter values, seem robust against noise, and regenerate quite accurately the dynamics as observed in the actual natural systems. This model, known as ISCAM, therefore provides a simple and useful tool to study this phenomenon. Although the model itself was already developed several years ago, some of the work is still ongoing. 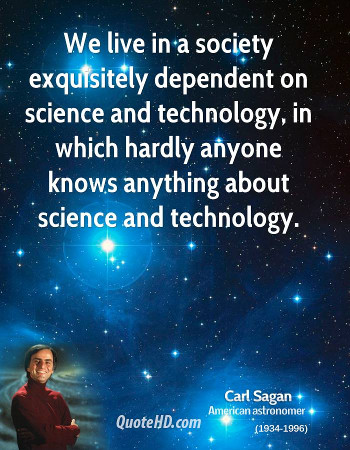 Carl Sagan's concern (to the left) is even more true today than when he first expressed it. Therefore, I am very interested in trying to explain scientific ideas and results in an easy-to-understand way to the general public.

I regularly publish popular science articles in various online outlets. Also, I have put together an exhibition called "The Art & Science of Nature", which is now available online. And I occasionally present lectures about topics I've worked on or find interesting, but explaining them to a general audience.

There are many other projects I have worked on over the years, related to cellular automata, genetic algorithms & fitness landscapes, algorithms for phylogenetic tree reconstruction, species distribution modeling, simulating chemical reaction networks, modeling foraging behavior, teaching evolutionary algorithms, general computing support, high performance computing, and so on. Too many to list in detail here...